Max Shrager “Thoughts Of You” EP In The Webstore Now 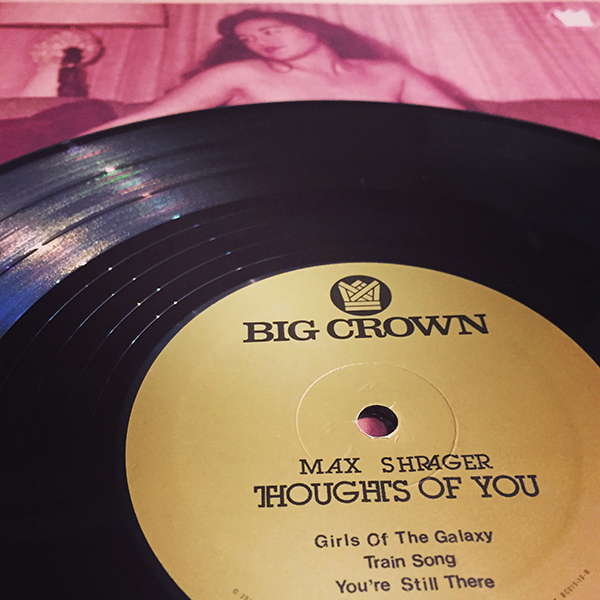 Big Crown Records is proud to present Max Shrager’s debut EP, “Thoughts Of You.” This is a collection of songs that Max, now 20, recorded over the past 5-6 years and what he calls “the best of everything I’ve done as a solo artist up to this point.” Now dedicated to his band The Shacks, he spends most of his time focusing on writing and recording for their upcoming EP & full length due out on Big Crown in Fall of 2016 and Spring of 2017 respectively. Six songs on a beautiful 10″ picture sleeve EP, another Big Crown sureshot.

Each song on this record represents a period of my life. Listening to them brings me back to the experiences that inspired them, like a smell that causes a flood of memories.

“Sophia” I wrote “Sophia” in a piano rehearsal room at my high school. It started with those first two chords, and I just kept going because the harmonic movement was making sense. I came up with the chorus a few minutes before we cut the rhythm track.

Tom Brenneck got excited about this one early on, which was very encouraging.

“Thoughts of You” This one was written the summer I moved to New York City. I thought of it as a country ballad as I was writing it. It ended up having some interesting rhythms and flavors. My grandmother came downstairs to my parent’s basement as I was recording the guitar, and she was in to it.

“Silver” I bought a 12 string Martin guitar at First Flight music and brought it to school. I ended up skipping class and sitting in the park, working on a song idea that came to me the night before. My new girlfriend had given me a silver ring, which I put in my pocket. It got all scratched up, among the coins, which made me feel guilty and provided the inspiration for this song.

“Girls of the Galaxy” This one was really fun to record. It’s very much about the production for me, which I did with Homer Steinweiss. Listen closely for the Spanish radio crosstalk at the end.

“Train Song” This tune is about the train ride from New Jersey to New York City that I must’ve taken a thousand times. There’s also some stuff about a trip to Las Vegas, where my dad and I walked miles out of the city on a dusty highway and ended up at a nuclear testing museum.

“You’re Still There” This is a love song that was inspired by a specific feeling I had one night in Atlantic City. The feeling was so deep and unique that this song just poured out of me at the piano. The drums were recorded by putting the microphone under a ceramic pot.