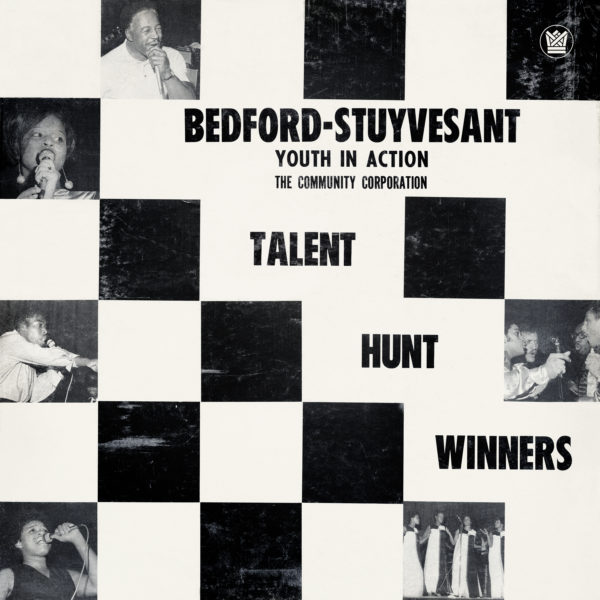 Big Crown Records is proud to present the reissue of one of Brooklyn’s most sought after “holy grail” soul records, YIA Talent Hunt Winners. Youth in Action, Inc. (YIA) was formed in 1963 when the Central Brooklyn Coordinating Council received a grant to develop a youth services program in the Bedford-Stuyvesant community. It was originally organized to identify and address the social problems that were leading to the high crime rate in Bed-Stuy. Recently the Smithsonian Museum of African American History released an archive of footage filmed by a community activist, which shows the real-world effects of the group’s efforts: young people engaged in sports, the arts, and other activities to better themselves and their world. The appearances by Jackie and Bobby Kennedy point to the group’s relationship to the Great Society programs of President Lyndon B. Johnson. What there is no mention of in either the NMAAHC’s collection of YIA materials nor in the Brooklyn Public Library’s also extensive collection is this talent show and the record that came to be because of it.

Local vocal groups chose tunes to cover from the era (1964 – 1968) ranging from The Rascals to The Intruders, from The O’Jays to Billy Stewart. All of these groups were backed by a local act called The Thrillers Band. The winners of the talent contest were then invited into the studio to record their versions which would be pressed up on this record and given away to local radio and TV stations. The hope of the whole thing was that this would help the young groups get discovered by producers and record labels and start their professional music careers. The intro to the album is Reverend Horace Tyler congratulating the winners and asking them “to just remember, when you reach the top and become our big stars of tomorrow, don’t forget YIA”.

What this album may lack in fidelity and production it more than makes up for in charm. The engineers at the recording sessions pump in pre recorded applause and screaming to give the it the feel of the day of the contest while the young groups sing their hearts out, clearly giving their all. From today’s perspective, soul music fans will lose it over the choices of covers on this record and the killer, raw, innocent performances of them by these local Brooklyn groups. The Channels 4, Carla & The Carlettes, The United Souls, Sharon Seabrook & The Starlettes, and The Destinations all won that day and got to take place in this record. It makes you wonder, and even pine for the performances of the groups who didn’t make the cut, even if just to find out what tunes they covered, or better yet, were their original songs written by some of them for this contest?

It is with great pleasure that we make this available to the public again. This is a truly rare record, and an awesome piece of New York History.